While parsing the general literature, I found this paper from van der Heide et al. (2017) giving some numbers about end-of-life decisions in the Netherlands these past 25 years. I was wondering if one could see similar evolution in Belgium. And I didn’t have to look very far: van der Heide cited another NEJM paper with Belgian numbers (Chambaere et al., 2015 ; an attentive reader will notice “Belgian” data is “only” about Flanders, not the whole Belgium).

If you put together the data about euthanasia itself (not counting other type of end-of-life assistance), you obtain approximately the same proportion and evolution: 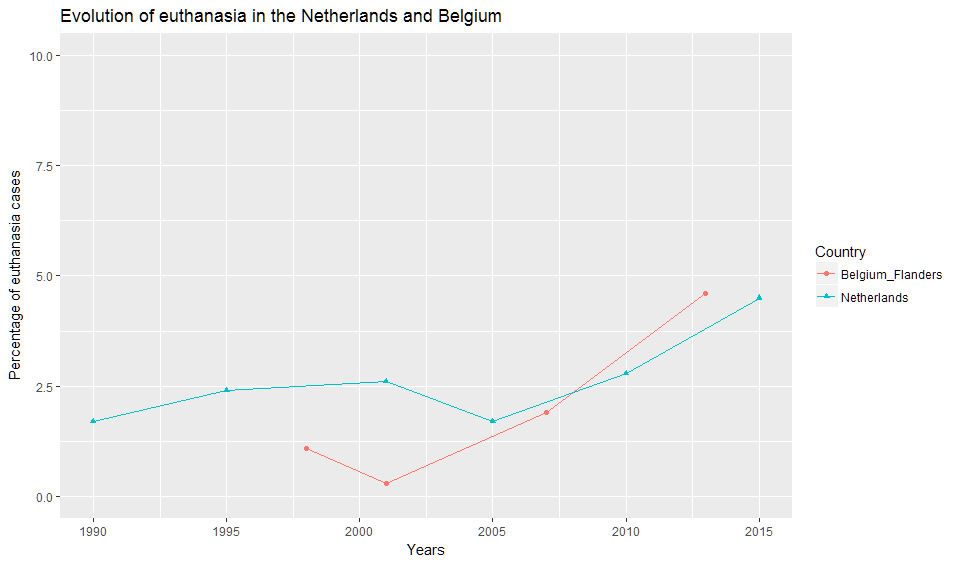 I’m not aware of more recent Belgian data using the same methodology (i.e. physician interviews). The Belgian Commission fédérale de Contrôle et d’Évaluation de l’Euthanasie (CFCEE) presented its last report in October 2016. This report contained numbers for years 2014 and 2015. But these numbers were related to euthanasia that were officially requested (and granted) by the Commission. For instance, the Commission granted 1 928 euthanasia for a total of 104 723 deaths in Belgium in 2014 (i.e. 1.84% ; deaths in Belgium in the Open Data repository). If we focus only on requests written in Flemish, we find 2.59% of euthanasia in 2014 (1 523 euthanasia for a total of 58 858 deaths) (note: Flemish is the language spoken in Flanders – the region targeted by interviews in the Chambaere et al. paper – but requests in Flemish might have originated from other regions). One might have found different numbers if one would have used interviews like van der Heide or Chambaere.

Dataset (note there is more data in a Wikipedia article)

A few weekends ago, I was challenged by a friend to do more steps than him. Of course, I won 😉 But I noticed he was wearing his activity tracker on his wrist while I was wearing mine on my waist. As I noticed several times before, when I had an activity tracker on my wrist, these devices tend to capture some movements even if you don’t actually walk (while typing energetically on the computer or while driving for instance).

So I took the opportunity of a small trip to wear 2 activity trackers, one Fitbit One on my waist and one Fitbit Charge HR on my wrist. END_OF_DOCUMENT_TOKEN_TO_BE_REPLACED

A few words of appreciation for an open source software that can help you a lot in your work, Engauge Digitizer (ED) from Mark Mitchell. ED is a simple, straightforward curve digitizer: it takes images with graphs like the one below and transform them (with a little help) in data you can use later on.