2013 is near its end and it’s time to see what happened during the last 360 days or so. Many things happened (graduated from MBA, new house, holidays, ill a few days, …) but I wanted to know if one could quantify these changes and how these changes would impact my daily physical activity.

For that purpose I bought a Fitbit One in March 2013. I chose Fitbit over other devices available because of the price (99 USD at the time) and because it was available in Europe (via a Dutch vendor). At that time the Jawbone Up was unavailable (even in the USA) and the Nike Fuelband couldn’t track my sleep.

Basically the One is a pedometer (it tracks the number of steps you make per day) but also the number of floors climbed and the time asleep. Note you have to tell your device when you go to sleep and when you wake up ; it will substract automatically the times you were awake. The rest of the data presented are taken from these few observed variables: distance traveled, calories burnt, … The Fitbit website also categorizes your activity from ‘sedentary’ to ‘very active’.

Of course there is an app (for both iOS and Android) where you can also enter what you eat (it automatically calculate the number of calories ingested) and your weight (unless you buy a wifi scale from them). You can set goals on the website and then it tells you how many steps you have to make per day. All this data is stored on a Fitbit server and you can access it via your personal dashboard (yes your data is kept away from you but there are ways to get it …). 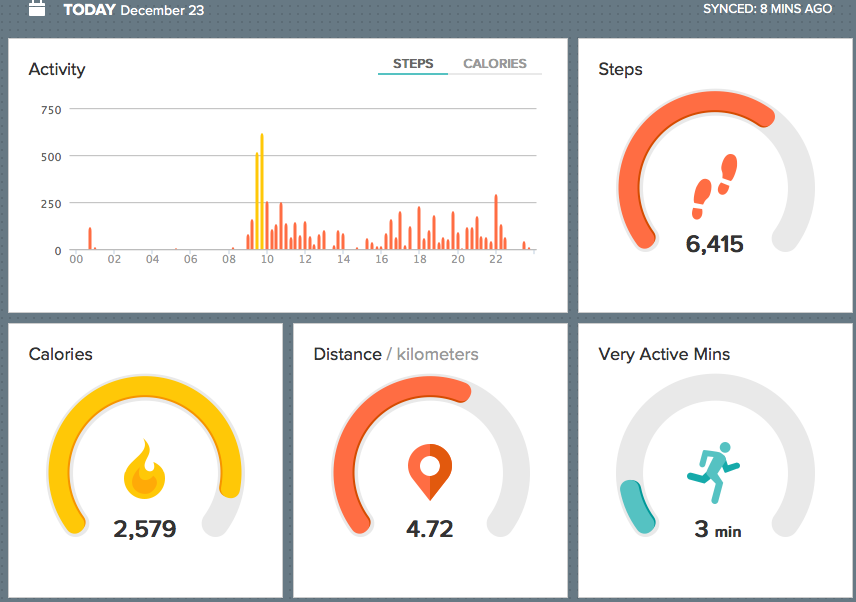 I liked the Fitbit One mainly because it is easy to use: you take it and forget it, it works in the pocket. There is a nice, easy to use web interface – great for immediate consumption (not really for long trend analysis). It is quite cheap to acquire the device (well, it is quite small anyway). It works with desktop software as well as mobile app (incl. synchronisation). The One can easily be forgot in a pocket (gives peace of mind) but it doesn’t work when you don’t have pockets (shower, pyjama, changing clothes, … ; I didn’t use the clip/holder at the waist).

That leads me to its disadvantages …

But the last and main disadvantage that comes to my mind is linked with its advantage: it is so easy to use and to forget (in the washing machine), it can fall and you won’t notice it.

So of course I lost it. It was in a business trip in South-East Asia. I thought I put it in my suitcase when changing pants but I couldn’t find it anymore. So after a few hesitations I chose to get a Fitbit Flex.

The Flex comes in another format: it’s like a small pill that you put in a plastic armband-holder. Therefore it is closer to the body (but not legs, to count steps) and therefore you don’t need pockets. However it doesn’t give time (if you have a watch you’ll have 2 devices at your left wrist? Fitbit now sell an evolution of the Flex – the Force – with LEDs displaying time a.o.). As it is always in its armband I feel it is less likely to be forgotten. And you don’t need pockets, it’s like a bracelet you receive at some concerts. The battery autonomy is approximately the same: around 7 days. You can read here another comparison of the two.

In order to dig the past I could:

Of course I chose the third option. It is a bit more complicated but helped with one of Ben Sidders’post I started coding my “app” in R, the statistical language. As there is a bit more than Ben is explaining I posted all my code on the Github repository of my app, jepsfitbitapp.

The first thing I wanted to see is the most obvious one: my steps. As you can see in the figure below I started to collect data in March 2013 (with the One), I stopped collecting data around October 2013 (when I lost the One) and I re-started later on (with the Flex). I usually walk between 5,000 and 10,000 steps per day, with a maximum on July 1st (the day we moved). 10,000 steps is the daily goal Fitbit gave me. There is a significant difference in the number of steps measured by the One (before October) and the Flex (after October): I cannot really say if it is due to the change in tracking device (and their different location on the body) or if I kind of reduced my physical activity (mainly because of more work, sitting in the office). 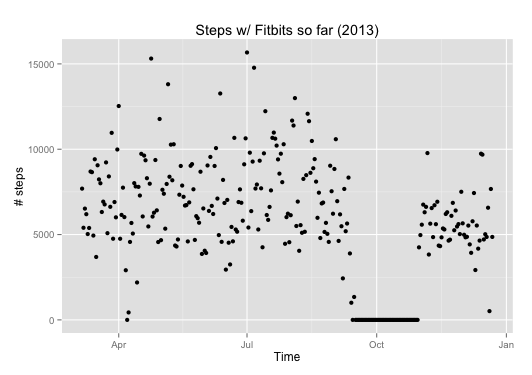 As always, I’ll promise to add some physical activity on top of this baseline as a New Year resolution. We’ll see next year how things evolve. In the meantime I’ll explore more what I can extract from my Fitbits in the following posts. Stay tuned!

Here is yet another interesting video from Prof. Hans Rosling 🙂 From the video: “Believe me, there is nothing boring about statistics, especially not today when we can make the data seen”. For the rest, watch the video …

Btw, it is also featuring David McCandless whose work was already shown here before. Re- 🙂